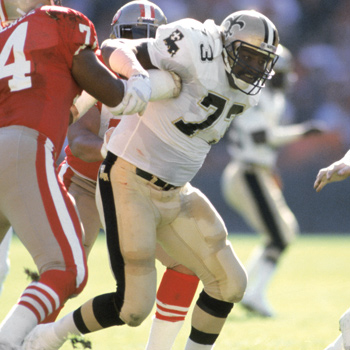 Selected by the Saints 57th overall in the third round of the 1981 NFL Draft, this Auburn product appeared in 189 games with 83 starts over his 14-year NFL career, all with New Orleans. His 189 games played are the third-most in franchise history, the most by a defensive lineman. The Birmingham, Alabama native finished his stellar NFL career with 52.5 sacks, one interception and 11 fumble recoveries, earning him a place in the New Orleans Saints Hall of Fame. His 52.5 sacks are the fifth-most in franchise history.